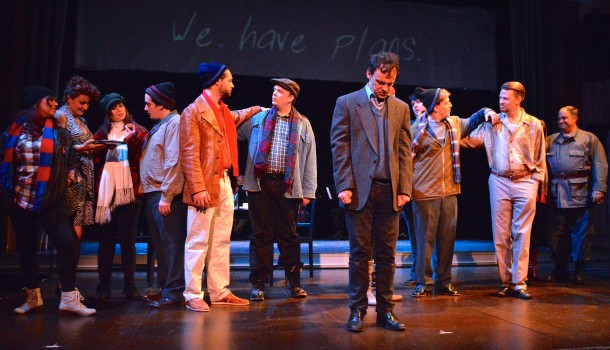 From the opening moment of The Velvet Oratorio – with libretto by Edward Einhorn and music and direction by Henry Akona – you are swept up into an uncommon and soulful exuberance.  And as the show progresses you gradually become part of a harmonic world of music and dramatic art, dispelling the mist of any lack of familiarity with the events of 1989 on the eve of the fall of the Communist government in Czechoslovakia.

The peaceful, largely nonviolent revolution came only eight days after the fall of the Berlin Wall. Henry Akona’s dedication of the oratorio “to the crowds in squares all over the world who believe that, through peaceful protest, truth and love can prevail over lies and hatred,” is telling in the wake of the Arab Spring and events in the Ukraine and other places.  The original concert version was more narrowly, if still gratefully dedicated “to the people in Wenceslas Square.”  And yet with all the political violence still going on in the world, this production reminds us that the powerful  freeing power of “truth and love,” evidenced in in peaceful protests, is all too sporadic.

Like Handel’s Messiah, this oratorio combines orchestra, a choir and soloists. Unlike Greek drama in which choruses comment on actors and scenes, here the characters’ dialogue comment on the action of the choruses.  You have diplomats and ordinary citizens trying to make sense of the larger picture. As the protests grow, the Czech government makes concessions.  Characters in the show, such as Shirley Temple Black, a diplomat at this time, comment. Black is well-acted with the proper dignity and distinction by Andrea Gallo.

Aside from Andrea Gallo, all the performers give impassioned and at times quite funny performances. The Pig, Havel’s last play, was uproariously funny, speaking volumes for the sense of humor of the late dramatist and Czech Republic President himself as well as the the show’s outstanding cast members. In this production, Ross Degraw as Officer, Oliver Fetter as Drum, John Gallop, Baritone, Marina  Kifferstein, Second Violin, Jonathan Klein as Communist, Jillian Kukl as Student, Mike Maloney as Martin 2, , Nadya Meykson, First Violin, Michael Midlarsky, Cello, Jenny Lee Mitchell, Mezzo, Soprano solo, Mike O’Brien as Michael, Victor Romeno as Collective Unconscious, Eric B. Oleson as Stanek, Nick Ravel, Viola, Yvonne Roen as Vera, Emily Shankman, Student, Phoebe Silva, Student, Phoebe Silva, Student, Rebecca Steinberg, Trumpet, Moire Stone, Soprano, Mezzo solo, Terence Stone, Tenor, Matthew Trumbull, as Vanek, Michel Villastrigo are all deliver powerful and appealing performances.  Jenny Lee Mitchell stood out for her clear and haunting singing, especially since I understand she was struggling to get rid of a cold at the time. As for Mr. Akona and Mr. Einhorn, who is also the Artistic Director of Untitled Theater Company, give the show both poignancy and fast-moving dramatic power. I for one would love to see both talented writer and director/composer bring their combined magic to a purely “mainstream” great dramatic work such as Eugene O’Neill’s “The Moon for the Misbegotten.” I can even see them doing it with a chorus and orchestra! 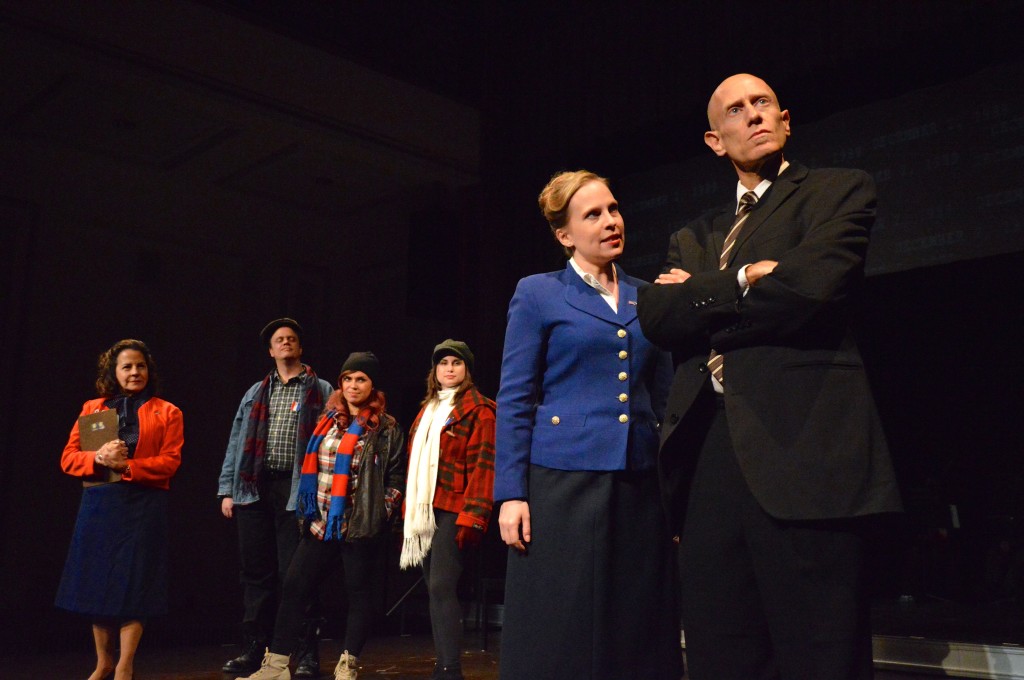 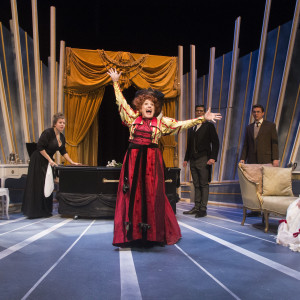 (Photo: Marcella Sorella, played by Joy Hermalyn, surrounded by the cast of "A Wake or a Wedding". Credit: Monica Simoes) Review...
Copyright 2015 Ward Morehouse III
Back to top