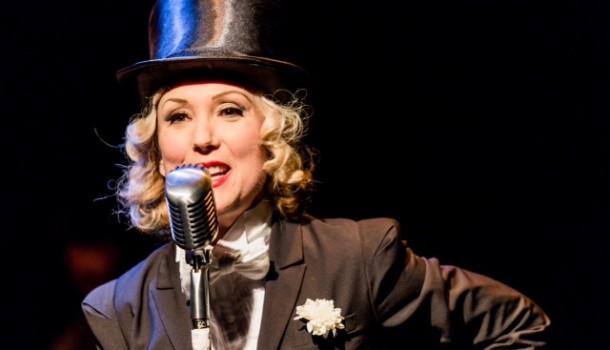 I saw two adventurous and entertaining shows recently and while their styles couldn’t be farther apart, they both were startlingly insightful as well as a lot of fun.

Singer Jackie Draper returned to the Laurie Beechman Theatre with a one-woman show called Designing Woman. Accompanied by her longtime music director Gregory Toroian on piano, Ritt Henn on bass and Robbyn Tongue on woodwinds, Ms. Draper illuminates each song from “Something In Your Smile” (Leslie Bricusse) to “Make Some Magic” (Blossom Dearie, Johnny Mercer/Duncan Lamont) with unique clarity and unadorned appreciation. Each song tugs at both mind and heart with a unique personal meaning for her and audience members.

Money Lab, conceived and directed by Edward Einhorn, head of Untitled Theatre Company No. 61, is a brilliant potpourri of cabaret and Brechtian vaudeville. Often performers directly address the audience interrupting the narrative in fresh and humorous ways as well inviting people to be part of the show. Money Lab is at HERE, 145 Sixth Avenue through April 11.

Yet not all is strictly fun and economic games. One question Money Lab addresses, Mr. Einhorn writes in the program is “how much do we really value art … (and) is it important to us.”

Actor Mick O’Brien, who plays the MC, keeps the evening rolling right along by asking the audience to bid on items with plastic chips they have purchased. The competition is fun as well as instructive. But, surprisingly, several people pooled their chips altruistically to help another make a purchase — something that seems out of kilter with strictly competitive business practice.

The climax of Money Lab was a segment called “Love and Greed,” sung by Jenny Lee Mitchell. The glamorous Ms. Mitchell, who studied classical voice in Vienna and Munich, transports us to Germany in the 1930s. Yet the piece speaks to our own unstable economic times where cut-throat greed, the love of money, overshadows the love of humanity. The “Dead Cat Bounce” segment was entertainingly and satirically instructive, pointing to market highs and lows which are not as final as they do appear.

Ms. Draper’s rendition of songs in Designing Woman also often go beyond joie de vivre. She nimbly treats us to soulful elements not primarily associated with pieces. I found this was especially true with “Let Me Be Your Mirror.” With two of her songs, “It’s My Party” (Herb Wiener, Wally Gold, John Gluck, Jr.) and “The Ballad Of Pearly Sue” (Gerry Mulligan) I noticed some audience members so enthusiastically engaged I thought they were almost tempted to join Ms. Draper on stage.

Oscar Wilde is said to have once quipped that some people know the price of everything and the value of nothing. But you can’t put a price on the artistry of Money Lab and Designing Woman. They take you on a refreshing musical journey of self-discovery as well as joy.