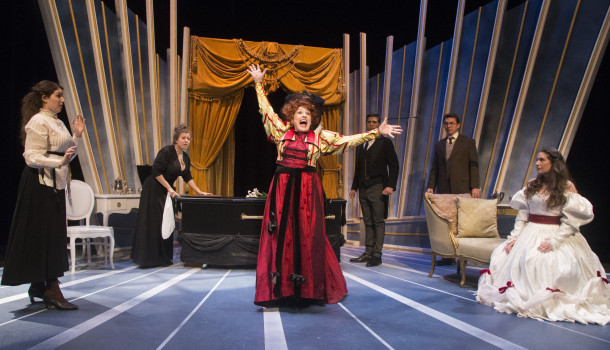 (Photo: Marcella Sorella, played by Joy Hermalyn, surrounded by the cast of “A Wake or a Wedding”. Credit: Monica Simoes)

New Encompass Theatre’s production of ‘A Wake or a Wedding” is charming, entertaining and funny. What starts off a bit slowly turns steadily into an amusing comedy with several completely unexpected and mad plot turns – true to the style of comic opera. Under Nancy Rhodes direction, the cast had the audience well entertained throughout with splendid acting and strong singing despite a relatively dead space that did not do much for voices. The singers were accompanied by a chamber orchestra conducted by Mara Waldman, which unfortunately sometimes outplayed the voices in the small space.

New Encompass Theatre, founded by Nancy Rhodes in 1975, is dedicated to fostering American and international modernist opera. Their latest production by Richard Pearson Thomas (both composer and librettist) is a story set in Montana, of the family and household of a copper king who has just passed on, on the eve of his daughter’s wedding. This leaves his family and household in a state of turmoil and chaos, which only deepens with the arrival of an opera diva and her cohort, who have been hired to sing at the wedding. Despite being “modern” music, Pearson’ score is relatively accessible and lyrical. Most importantly for an English opera, the score allowed the singers to effectively communicate the story. To their credit, the singers did a fine job with the diction and communication through acting.

Joy Hermalyn was a treat to watch – her strong comedic acting as the aging and loud opera diva, took the performance to a whole new level. Alison Davy did a beautiful job playing the wistful wife Deirdre. The three young sopranos Lindsay Rider, Marie Anello and Caroline Miller all gave solid performances – Lindsay Rider as Miss O’Dell was particularly exciting to watch with strong acting and a beautifully warm and even tone through the different registers. Of the male voices, Jack Highstraw was particularly memorable.

All in all, an enjoyable experience and wonderful effort by a talented group of performers. Hats off to Nancy Rhodes for preserving and keeping the space of Chamber Opera alive in today’s world.

Nitya Thomas, an accomplished professional singer herself, is an occasional guest reviewer for Broadwayafterdark.org. She can be contacted at nitz00@gmail.com

Mike Nichols, who died last week, undoubtedly was one of Broadway's and Hollywood's very greatest directors. His awards for excellence...
Copyright 2015 Ward Morehouse III
Back to top