A Night at the Kazakh Opera

As New Yorkers, we are fortunate to witness the entire world’s art and culture literally at our doorstep. This past Monday I was reminded of this privilege, after hearing the Astana Opera Company from Kazakhstan at Carnegie Hall’s Stein Auditorium. This recently formed opera company (founded in 2013) made its Carnegie Hall debut as part of its first world tour, which will also include Opéra Bastille and De Doelen.

The program consisted of a nice mix of popular pieces from Western and Russian operas, as well as some traditional and contemporary Kazakh music. The Astana Opera Symphony Orchestra, consisting mostly of young people between the age of 25 and 30, set a high standard right from the beginning with a piece for orchestra by Kazakh composer Rakhmadiev – in my opinion, easily matching the standard of any world class orchestra. Young, virtuoso violinist Erzhan Kulibaev was superb in Tchaikosky’s violin concerto (D major, Op. 35), making the violin sound like it was literally crying in the very high registers. Of the singers, tenor Medet Chotabayev and Baritone Sundet Baygozhin stood out; Baygozhin’s rendering of the famous Largo al factotum aria from Rossini’s Barber of Seville was meticulously articulated and charmingly enacted with great personality and got a fantastic reception from the audience. The Kazakh folk medley performed acapella by the chorus was breath-taking, with a beautifully sweet tone which is a rare sound for choir of operatic singers, particularly from the women. An orchestral piece featuring two traditional Kazakh instruments (the dombyra – a sort of lute, and the kobyz – a soulful sounding violin) brought out more of a traditional East Asian sound and made me long to hear more of this beautiful, traditional music of the country.

The program ended on a high with the enchanting melodies of the popular Polovtsian dances from Borodin’s opera Price Igor – reminding us once again of the high standard of this newly formed opera company. For those of us who weren’t so aware of this before, it is clear that Kazakhstan has a solid infrastructure for nurturing young talent, given most of these young performers have trained in their home country, with some furthering their training at a higher level in Italy and eventually performing in Europe as well. Certainly an effort to be highly commended and respected. All in all another great and very “New York” evening, with the perfect blend of east and west.

Nitya Thomas, an accomplished professional singer herself, is an occasional guest reviewer for Broadwayafterdark.org. She can be contacted at nitz00@gmail.com 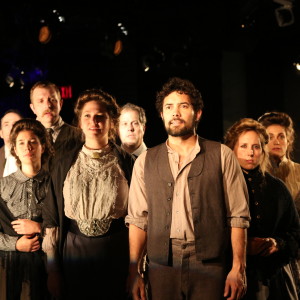