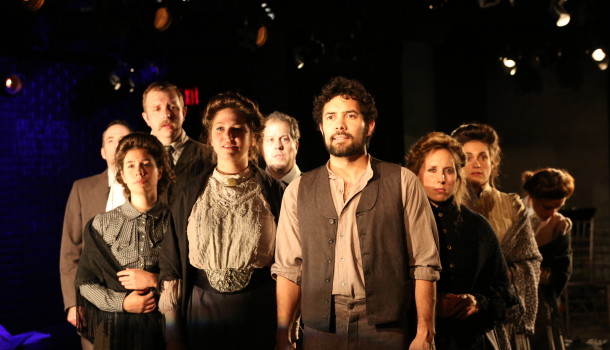 As part of the Theater Village’s second annual festival, E Pluribus, a remarkable new work is being presented at the Axis Theatre: “Solitary Light.”

The focus is the Triangle Shirtwaist Factory Fire and the events surrounding it.

It opens on a ship crossing the Atlantic, the “solitary light.” This is to be the theme of the piece, its leit motif.

The audience is introduced to the immigrants on board, and hears of their dreams, so strong as to overcome their fears.

It follows them to the streets of New York, the factory, the park. The audience gleans something of the young women’s aspirations in a ballet sequence. The burgeoning union movement is shown amid all the attempts to suppress it. (Had the Triangle factory been a union shop much of the fire’s carnage would have been averted: the doors wouldn’t have been locked, trapping the workers.) Many of the young women had participated in a massive strike that became known as “The Uprising of the Twenty Thousand” in 1909. The tragic fire occurred on March 25, 1911.

This extraordinary effort has a book by Randy Sharp, who with Paul Carbonara also wrote the music and lyrics. Sharp is responsible for the splendid direction as well. Special praise is due the lighting director, David Zeffren, who created such vivid illusions that the absence of solid sets wasn’t noticed. Signs, “On the Ship,” “The Streets of New York,” “The Factory,” “The Park,” and finally, “The Fire,” are the ingenious device that sets the scenes. The appropriate costumes are by Karl Ruckdeschel and sound design—we hear the sound of sewing machines even before the lights go on—is by Steve Fontaine.

We see all of this through the eyes of those affected, largely the young women. “The Fire” itself is almost an anti-climax. There is an assumption that the audience knows about the fire—which it almost certainly does. What this work does is give faces to the victims.

The most effective music in “Solitary Light” is the Union Song, whose lyrics stress “We will stand with the working girl… when a million of us march out for our rights.” This piece is on a par with Solidarity, (Elton John) from “Billy Elliot” and every bit as stirring as Your Land and My Land (Romberg) from “My Maryland,” and Stout-Hearted Men (Romberg) from “New Moon.” This reviewer must admit to wiping a tear.

This “musical” is actually an opera, although one hesitates to use the word for fear of deterring potential theater-goers. However, it’s easily accessible even to the most opera-phobic. Would that the New York City Opera were still in existence. “Solitary Light” would surely become part of its repertory.
Among the musical offerings is Beautiful Girl, effectively sung by Jared Young as Frank, the photographer, who describes the different sorts of girls: “one dark, one bright like a star.” Also, Think of the Riches ( as we’re shown the grinding poverty) Firefly, Such a Fine Day, Pretty Pretty Things and What Is a Camera?

Central to this effort is the “Remember the Triangle Fire Coalition.” “Solitary Light” could be seen as a plea for the creation and strengthening of unions worldwide, as, alas, plus ça change, plus c’est la Même Chose: the union-suppression campaign here, and as garment manufacture is outsourced, the Triangle-like conditions that prevail on much of the Indian sub-continent, Bangladesh in particular, where fires occur frequently. Thus, “Solitary Light” is not only important in remembering history, it is relevant to today’s labor situation.

“Solitary Light” opens on Monday, Sept. 15 and closes Oct. 4. This review is based on the Sept. 12 preview.

The Axis Theatre is at 1 Sheridan Square, close to where the fire occurred.
www.axiscompany.org

A Night at the Kazakh Opera 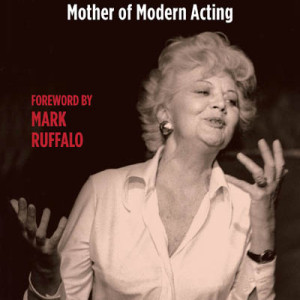 Review by:  Beatrice Williams-Rude Upon seeing “Stella!” many people will probably think of Marlon Brando in “A...
Copyright 2015 Ward Morehouse III
Back to top