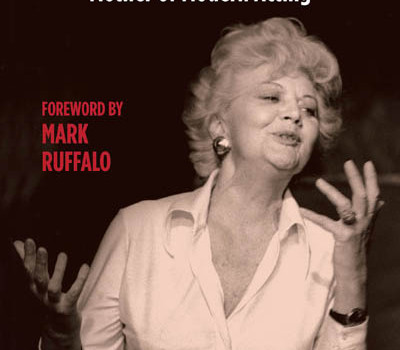 Upon seeing “Stella!” many people will probably think of Marlon Brando in “A Streetcar Named Desire” bellowing, demanding, pleading that his wife, Stella, return to him.

They wouldn’t be far wrong. This time, however, the Stella is Stella Adler, Brando’s teacher and lover—age disparity notwithstanding.

Stella Adler was a brilliant actress, director, producer, power-house teacher, Irgun gun-runner, ardent proponent of Jewish causes and dazzling blonde glamour girl. The foreword is written by actor Mark Ruffalo, a former student and admirer. The book is subtitled “The mother of modern acting,” although using Stella Adler and “mother” in the same sentence might bring Medea more to mind than Molly Goldberg.

Arguably Stella Adler’s greatest performance was before the House Un-American Activities Committee (HUAC). She didn’t take the Fifth, as did the Hollywood 10 who then were imprisoned, nor did she name names, as did Elia Kazan. She played the dumb-blonde innocent to perfection and escaped  unscathed.
This is among the many tidbits in a monumental new bio written by Sheana Ochoa, who worked on the project, judging by the dates on the footnotes, for well over a decade. The research is prodigious. She looks at  Stella, and indeed the entire  Adler clan, in the context of history, starting with Czar Alexander II (“the czar liberator”) who was assassinated in 1881, through the pogrom at Kishinev to Stella’s death in 1992. The glitterati pop up all over the book, not because the author is name-dropping, but because they are part of Stella’s world: FDR. Eleanor, Ben (“The Front Page”) Hecht, Quentin Reynolds, Prokofiev, movie and stage stars, playwrights, including Arthur Miller, who claimed to have been inspired to  write by seeing Stella perform, and, of course, Stanislavski, as well as the man who would become Stella’s bête noir, Lee Strasberg.

Ochoa has amassed a mountain of information about the entire Adler clan, starting with Stella’s father, Jacob Adler, the lion of Yiddish theater, whom John Barrymore came to watch to “learn how to act.” Jacob Adler, the handsome, charismatic patriarch who ruled with an iron fist, doling out love according to how someone performed onstage, looms large throughout the book. Stella’s mother, Sara, her siblings, (legitimate and illegitimate) among them Celia, Luther, Frances and Julia, were all working in their father’s theater, Stella from the time she could walk. The theater was their real home.

This bio is a work of great magnitude, but  it’s as if readers were led into the stacks of a library and left to fend for themselves: 290 pages in search of an editor. For example:

The great director  Harold Clurman (who became Stella’ second husband) is quoted at the top of  Chapter Four as saying “All of his children were in love with [Jacob], incestuously in love with him.” A bit later, an explanation of the behavior of Julia, an older sister of Stella, is posited as perhaps “having something to do with the sleeping arrangements.” Jacob Adler slept with his daughters—he slept in Stella’s bed until she was 18 and while she insisted they had not been intimate, the same is not true of Julia, who later fled. The subject is not mentioned again for more than 100 pages, then toward the end, page 289, Stella is quoted as calling her father “degenerate.” The bunker-buster was dropped early on, mentioned thrice, but its effects were not examined.

Stella’s grandson Tom Oppenheimer is quoted as saying he never attended any of Stella’s classes on the West Coast and feared they were full because people wanted to watch Stella cut up her students—acting classes as a blood sport. James Coburn concedes that Stella was particularly rough on women and there is a line before the birth of Stella’s daughter noting that Stella hoped for a boy because she preferred the male sex.

The reader is told how devastating Stella could be to students, females in particular, yet never shown examples: not the how nor the why.

Where men are concerned, Stella is described as being like a child in a candy store. Truly her father’s daughter, the concept of sexual fidelity was foreign to Stella, yet we’re given few names.

Near the end of her life, it’s  conjectured that Stella’s dark mood might harken back to feelings about an abortion she’d had sometime during Group Theater days. That was back-alley coat-hanger abortion time when the procedure was illegal and dangerous. Who was the man involved? Who, where, how was the abortion arranged? (Maxwell Perkins where are you when we need you!)

A copy  editor could have corrected the spelling of Rudy Vallée, called attention to the missing names of the “two world-famous actors who were in the theater that night,” and, amid all the material on “Men in White” could have found a place to insert the name of the playwright, Sidney Kingsley, and spelled Stanislavski consistently. A copy editor could have noted that while Brooks Atkinson was indeed the critic for The New York Times he was not “the dean of critics” in 1931. The giants at that time included Burns Mantle, John Gassner, George Jean Nathan. Atkinson did not ascend to the “deanship” until after WWII.

Stella Adler’s life and career—the two were inseparable—reflects the tectonic changes in the theater in the  1930s as well the turbulence in much of the world. “Art Imitates Life” became the mantra of the theater as socially significant dramas began to replace mindless fluff. Group Theater  led the way with Clifford Odets front and center. Stanislavski was the mentor and proper interpretation of his “method” led to disputes and lifetime feuds. “Stella!” provides much riveting reading—and unanswered questions.

Why, despite Stella’s written instructions that she be buried next to her third husband, Mitchell Wilson, in the East Hampton cemetery where she owned six lots, was she interred in the Adler family plot in Carmel? Was this her daughter Ellen’s posthumous slap at her unmotherly mother and an embrace of Harold Clurman, Stella’s second husband with whom Ellen had a strong bond? (Harold was buried in the  Adler plot.)

We’re told that  among Stella’s myriad affairs was one with a president. It’s postulated that the president was not FDR. Could it have been Harding, because the family supported him because he looked like Jacob? We aren’t told.

While much attention is given to acting techniques, much more touches on the international situation pre- and post-WWII including McCarthyism and the Blacklist.
This is a weighty tome which in addition appealing to theater devotees and news junkies, should be of interest to historians, sociologists, psychologists and psychiatrists.

THE BOOK HAS 330 PAGES INCLUDING FOOTNOTES, BIBLIOGRAPHY AND INDEX. 15 PAGES OF PHOTOS. PUBLISHER: APPLAUSE.  US PRICE: $29.99.

The reviewer is a former actress  and singer whose mostly mirthful memoir is “Misadventures of a Would-Be  Muse.”
First published in the Black Tie Magazine: http://blacktiemagazine.com/recommended_reading/Stella_BY_Sheana_Ochoa.htm#sthash.LQOnT8u6.dpuf