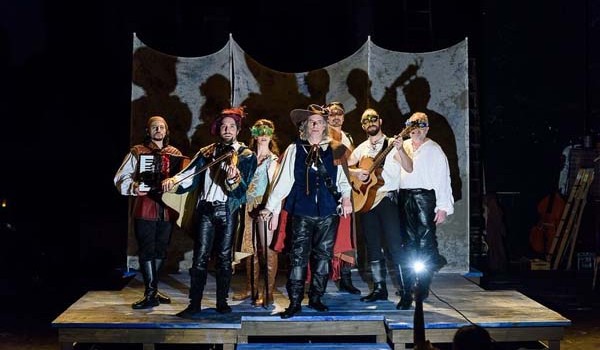 With this fabulous new production of Cyrano de Bergerac the golden age of  the American theatre is alive and well at the Theatre at St. Clement’s, one of the oldest continuously-operated Off-Broadway theaters in New York.

Directed by and starring Tony Award-nominated actor (for Best Actor) Gabriel Barre, this production of the Edmond Rostand classic is a classic itself. I’m positive that the late Jose Ferrer, who I knew personally and well – and who practically set the modern-day standard for the title role in his 1950 film — would have graciously taken off his own white-plumed hat in admiration to the acting and production.

Mr. Barre’s eloquent portrayal of the ski-nosed hero is thrilling in its pathos, sweeping majesty and sheer magic. The same can be said of his direction, revolving around a small turn-table where the love and battlefield scenes are seamlessly interwoven.

Barre, who most recently directed the musical Amazing Grace on Broadway, joins a long list of great actors who have played Rostand’s title character, including Mr. Ferrer at the New York City Center and Kevin Klein in 2007.  The late, great Walter Hampton first played Cyrano on Broadway back in 1923 and reprised the role on the Great White Way three more times in subsequent years.

This production of Cyrano de Bergerac was adapted by Gabriel Barre, Rick Sordelet and Alexander Sovronsky. It was produced by the Resonance Ensemble, Eric Parness, Artistic Director and Rachel Reiner, Managing Director.  Barre was supported by a highly-gifted cast including Bridget Saracino as Roxanne and Luke Darnell as Christian, who has the looks but lacks both the prose and poetry to express his love he feels in his heart for the beautiful Roxanne.  I also very much liked Rin Allen, Joe Jung, Mark Peters, Alexander Sovronsky and Louis Tucci in their roles.  Jennifer Paulson-Lee as the show’s choreographer also deserves great applause for her artistry.

NEW BOOK BY WARD MOREHOUSE III: The Bear Who Lived at The Plaza is the true-life story of a small brown bear, Bangkok,...
Copyright 2015 Ward Morehouse III
Back to top