Simon McBurney’s “The Encounter” on Broadway 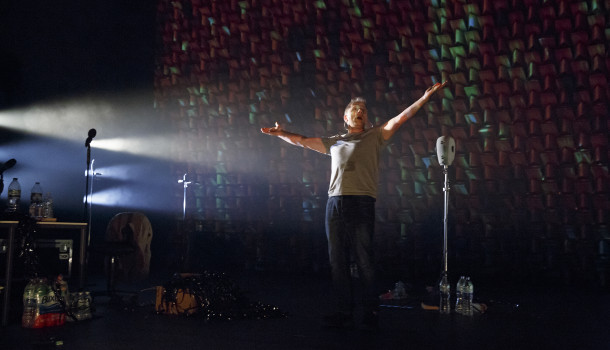 Simon McBurney’s “The Encounter,” which opened at Broadway’s Golden Theatre September 30, is an astonishing one-person tour-de-force.

The multi-Olivier Award-winning, Tony and Screen Actors Guild Award-nominated actor/writer/director leads the audience at the Golden on a brazenly-harrowing trip in the jungles of the Amazon River basin – with only his voice and 15 recorded voices programmed by sound wizards Gareth Fry and Pete Malkin.

At the start of the play the audience is asked to don earphones to “see” all the action through its ears and imagination. That is a remarkable achievement in itself:  No matter where members of the audience sit, they are “sound witnesses” to the play inspired by the book “Amazon Burning” by Petru Popescu. It graphically recounts the late National Geographic photographer Loren McIntyre’s quest deep into the heart Amazon territory in 1969. The explorer/shutterbug is searching for the Mayoruna Indians on the Peru-Brazil border.

And Mr. McIntyre almost doesn’t return. Sometimes, it’s the characters of Mr. McIntyre, as related by Mr. McBurney, a prominent tribe member and others who speak. But mostly it’s Mr. McBurney himself in his hauntingly-sonorous English diction. It’s as if the late, great Orson Wells was telling the story of Citizen Kane in the movie of the same name as well as playing its title character.

Mr.McBurney, speaking for Mr. McIntyre, explains that after landing on a remote river by seaplane he trudges deep into the jungle looking for a village occupied by the “Cat people” or Mayoruna.

“The truth was, that being fascinated with the Mayoruna he’s simply forgotten to mark his passage as he normally did,” Mr. McBurney relates. “He was so far into the jungle he had no way of getting back and time was passing. Five, ten, forty minutes later – still no village… Suddenly the trees pulled back … A narrow horizon of huts, perhaps six, seven, eight or nine at a glance … It was a village …”

This passage especially brought back memories of a trip journalist Clay Jones, now the chief editorial writer of The Christian Science Monitor and I had in 1976. We landed on the Columbian-Brazil border seven years after Mr. McIntyre’s trek several hundred miles to the south on the Peru/Brazil border.  Clay and I later wrote a series of articles for The Monitor about our adventure; they were syndicated in other newspapers as well.

The Encounter seemed to bring it all back. We flew on a DC – 3 from Villavicencio, where the Andes mountains meet the plains of Los Lianos, to Mitu, Columbia and from there traveled by single-engine Cessna much further into the wilderness. I won’t recount details of our journey other than to say in retrospect it bore remarkable similarities to Mr. McIntyre’s as depicted in The Encounter.

Mr. McBurney says Mr. McIntyre was befriended by a tribal leader he called “Barnacle,” just as Clay and I were befriended by a chief on a remote tributary of the Rio Negro River.  Both friendships grew out of self-preservation as well as curiosity.

“In the middle of the clearing he (McIntyre) saw the headman, who he had now christened, Barnacle, sitting in front of a fire on his carved stool,” Mr. McBurney says in his performance piece or play. “His cheeks were guant. His eyes were at half-mast, but he could see from a distance that his hands were moving with precision, of stature,”

At the same time, despite the incredible beauty of Mr. McBurney’s words and performance, I wasn’t as captivated with the rather elaborate “curtain raiser,” for want of a better description, of Mr. McBurney’s prelude to the heart of his journey when he describes the rather elaborate technical preparations in putting together his show.  But listening though earphones brings you into the very action of the jungle much like radio dramas of yore must have done.

In this prelude, Mr. McBurney also introduces the audience to the voice of his young daughter who wants to be told a bedtime story. If this and other interludes were meant to contrast “civilization” back home to the seeming timelessness of living in the jungle I applaud them. And an overriding important question pervades the play: is the obsession with recorded time in so-called civilized societies so seemingly important when it can vanish like the morning mist in jungle environs?

Yet his observations are sometimes revelatory. For instance, Mr. McBurney hints that he and Barnacle seemed at times to communicate in a metaphysical, telepathic language, wholly apart from verbal exchanges. I wanted to hear more about this in the play.

In sum, thank you Simon McBurney for giving Broadway one of the most original masterworks in years. Personally, I put it almost on the same level as seeing Richard Burton in “Hamlet.”  I left the Golden Theatre electrified, rejuvenated – and on a purely personal level found a fountain of my journalistic youth along the way at The Encounter.