All Aboard! For Grand Central Terminal Fast — and Good — Food and Serivce! 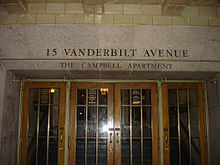 In Grand Central Station parts I and II, our Checking In columnist Ward Morehouse III told us about the history of what has been affectionately called “America’s Civic Cathedral” and its fine dining restaurants such as Metrazur and Cipriani’s.  Part III is devoted to a directing readers to some of the best “budget” eateries both in the station itself — and mostly on the Lower Level — and the very close surrounding area. But before decending on either the escalator or stairs to the Lower Level, let’s pause briefly at the Campbell Apartment, once the private office of tycoon John W. Campbell, and now one of the most beautiful cocktail lounges in all of America .You can get light fare from a club sandwich to a salad but drinks tend to be expensive, certainly compared to the prices at some of the warm and inviting pubs

In the Grand Central Terminal vicinity such as Annie Moore’s or even T.G. I. Fridays (part of the chain), both on 43rd St. between Madison and Vanderbilt Aves, just west of the Terminal. The space was leased in 1923 by John Campbell from William K. Vanderbilt II, grandson of Cornelius Vanderbilt the original owner of the New York Central railroad. At 30 feet wide and 60 feet long it was believed to be one of the largest ground floor spaces in New York at this time.

Perhaps the best place to pick up food to eat at the many tables and chairs on the Lower Level of Grand Central is the Grand Central Food Market, which is on the main level of Grand Central. You can get everything from sushi to fresh-cut fruit to crab cakes to cheeses of every variety. Open Mon – Fri 7 am – 9 pm and Sat. 10am-7pm. Then take the stairs just to the west of the Food Market for vacant seats on the Lower Level. Or use the escalator on the western side of the main concourse. You can get larger, or smaller, portions to take home or lunch or dinner-sized ones to eat in the station or on commuter trains.

You can reach the GCM (Grand Central Market) from Lexington Avenue and 43rd St and well as from Grand Central itself.

Some my favorites in the Grand Central Market:

* Wild Edibles. Purveyors to some of the city’s finest restaurants, try individual portions of fresh tuna or salmon at under $10. Don’t forget to ask for your “side,” either rice or a dish of fresh vegetables (T) 212 687- 4255.

* Murray’s Cheese. Celebrating its 63rd anniversary — but not at the GCM Market! — Murray’s offers everything from delicious blue cheese to Swiss in small or large “half-a-wheel” quantities. (T) 212-9221540

* Dishes at Home. Here’s where you can take away an entire sumptuous high-protein evening meal complete with whole grain rice or fresh vegetables. (T) 212-370-5511

Just downstairs from the Market, via stairs or escalator, are several dozen eateries. Some, like Grand Cental Zocalo, after table service. With others you sit at first-come-first-serve tables and chairs. Zocalo is the sister (or brother, if you prefer!) of Manhattan’s popular upscale (without the upscale prices) Mexican-themed restaurant. GC Zocalo is literally around the corner from the Oyster Bar, also on the Lower level, and has the advantage of being open on Sundays which the OB is not. (T) 212-687-5666.

Junior’s is another of my favorites — if you’re in the mood for real New York deli-style food. Aside from its 10-once steakburgers, it boasts pastrami and other overstuffed deli-sandwiches, cheesecake and so-called “skyscrapter desserts” which are dishes with mounds of ice cream, whip cream, etc. etc!  (T) 212-983-5257

Here are some of my favorities eateries around Grand Central Terminal.

* Annie Moore’s 50 E 43rd St between Madison Ave & Vanderbilt Ave), Located on what I call “pub row” –  43rd St. between Madison and Vanbderbilt Aves — Annie Moore’s is a delightful, wood-panneled resonably-priced pub with friendly service and good food. I suggest asking for a table near the front of the restaurant so you can “people watch” as well as dine. Singles will be confortable eating at its long wooden bar. No reservations are needed as there’s a constant turnover. But expect a slight wait, usually no more than five minutes, between noon and 1:00 PM. (T) 212-986-7826, www.anniemooresnyc.com

* Patrick Conways Restaurant 40 E. 43rd St.  This is another fine pub, with good hamburgers, club and other santwiches and an inviting bar single men or women can feel comfotable at. (T) 212-286-1873  www.patrrickconways.com

* Pershing Square 90 E. 42nd St. Owned by famed New York restaurateur Michael “Buzzy” O’Keefe, who also owns River Cafe, in Brooklyn, literally in the shadow of the Broklyn Bridge, Pershing Square is itself literally under the Grand Central “viaduct” which juts from GCT to what used to be Pershing Square. I like Pershing Square especially for breakfast and if you’re in a hurry to eat and run to work I suggest eating in one of the several dozen “up front” tables nearest 42nd St. You can seat yourselves. If you want a booth for 4 with its comfotable plush seats you will have to wait in what may well be a long lind for breakfast or dinner. I also suggest Pershing Square as an alternative to other area restaurants which tend to be patronized by local residents and not computers.

* Cucina Express, 200 Park Avenue in the Met Life, formerly the Pam Am, Building. Quick, good fare at reasonable prices. I worked in the Met Life Building for 4 years and would eat here regularly. It’s lox and assorted fresh fruit are popular for breakfast (T) 212-682-2211

*  Naples Restaurante, Also at 200 Park Ave in the Met Life Building, this dining spot has an entrance facing 45th St. Ditto Tropica, which like Naples has warm friendly service and good, reasonably priced food. Keep inmind that many in the towering Met L:ife building office workers pour in these places at lunchtime so they tend to be crowded then. Tip: arrive at 11:45 to try and beat the rush. The great thing about the Naples here is one can just have coffee with or without a bagel, English muffin of  broche and the staff won’t look at you as if you’re from the moon! 212-972-7001

* The Wheeltrapper at The Fitzpatrick Hotel Grand Central,141 East 44th Street at Lexington Ave NY, NY (T) 212 351 6800 www.fitzpatrickhotels.com. It’s called
The Wheeltapper for a good reason with its delightful and distinctive what I call train “dining car” atmosphere, complete with real-life train memorbilia such as signal lights.

Reviewed by Tom Gates for the Travel Smart Newsletter The book’s subtitle explains it all – “New York’s Landmark...
Copyright 2015 Ward Morehouse III
Back to top