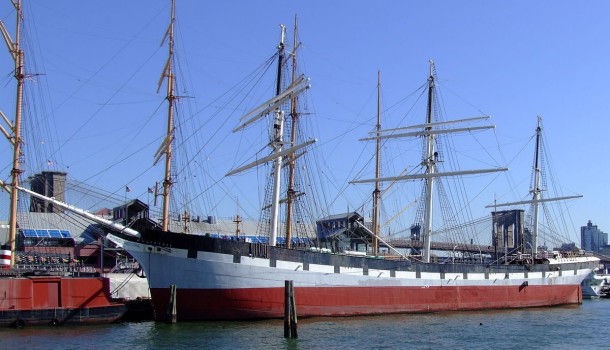 With the golden Brooklyn skyline as backdrop, the “Wavertree,” retired from her “vagrant gypsy life,” hosted an event that recreated the magic of the sea of old and the seafaring life.

Like Sirius, the lone star visible in the sky that night, the Knickerbocker Chamber Orchestra pierced through the ambient sounds of helicopters and even at one point, the horn of a ship blowing, in perfect complement to Charles Ives Symphony No. 3.

“Sails, Stars and the Sweet Sounds of Classical Music” featured the orchestra with Gary S. Fagin, the music director and conductor at it’s helm. The Knickerbocker Chamber Orchestra created musical maritime poetry aboard her deck, as it does other themes, at other interesting and unique, lower Manhattan venues.

Boarding the deck of the Iron hulled “Wavertree”  docked at Pier 16, a tour by an enthusiastic volunteer led us from mast to mast, through the eyes of it’s crew, leading us to discover the world of the old sea dinghy, when she was seaworthy. The vessel is in the process of being restored to some of it’s former glory.

Settling down to a full boat of classical music lovers of all ages, a glass of wine, chips and cookies, a red canopy shields the Knickerbocker Chamber Orchestra from the elements.

The orchestra consisting of two violins, one viola, a violoncello, flute, oboe, clarinet, bassoon, horn, trombone and bass, begin to etch into the estuary air, the ostinato’s of Stravinsky’s ” Concerto in Eb ( Dumbarton Oaks) in three movements (Tempo giusto- Allegretto- Con moto). Stravinsky wrote it during his darkest time; he found solace in listening to Bach’s “Brandenburg Concertos” as he watched his daughter waste away to terminal tuberculosis. He drew heavily from it. He called it “little concerto in the style of the Brandenburgs.”

Tenor Glenn Seven Allen who has performed on Broadway, off-Broadway, and at major regional theaters, concert venues, and opera houses throughout the United States, accompanied by the orchestra, passionately belted out director Gary S. Fagin’s lyrical arrangement and composition which set to music, John Masefield’s poem “Sea-Fever.” The music was profoundly moving capturing the angst and fervor of the poem completely. The yearning of the call to sea. This stood out in stark contrast to the instrumental sets and in some way because of it’s positioning between the other pieces and the fact that it was on a ship and Glenn Allen’s operatic voice did it such justice, made it a piece de resistance of sorts.

The orchestra then played “Eventide.” As it’s last few notes died away…Mr. Fagin quipped that brief as it was, Ralph Vaughn Williams’ beautiful, brief, “Eventide” (Abide with Me) from Two Hymn-Tune Prelude, it’s brevity didn’t in any way take away from it’s beauty. It didn’t! He added that purportedly, it was the last song played by the sinking “Titantic” Charles Ives “Symphony No. 3, The Camp Meeting” Pulitzer winning score, closed the evening on the East River on the majestic sailing boat with it’s lit up masts rising up in the darkening sky.

For this symphony, Charles Ives drew upon material from earlier liturgical organ works. Ives liked leaving choices of possible solutions up to the performer. The version we heard was based upon the published score of 1964 edited by Henry Cowell, but also took into some account a new edition, by Kenneth Singleton, which had significant differences with Cowell’s edition. Subtitled “The Camp Meeting” it had a hymn like quality and even draws from various hymns, “Silent Night” included.

“Stars, Sails and the Sweet Sounds of Classical Music” was a brief, enchanting foray into a long gone maritime past through orchestral music, thanks to the innovative programming of the Knickerbocker Chamber Orchestra.

Cobblescote on the Lake: panoramic views and unparalleled hospitality 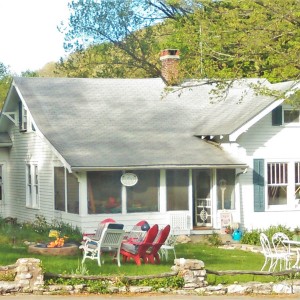