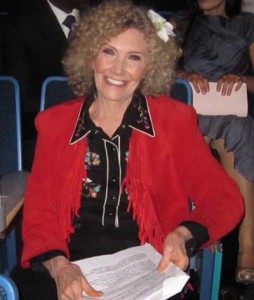 The mere thought of finding even partial funding for one’s film is enough to make many filmmakers swoon with delighted anticipation. So, to be sure, at a star-studded ceremony at the New Beverly Cinema in Los Angeles today, when Carole Dean was presented The 2012 WIFTS (The Women’s International Film & Television Showcase) Lifetime Achievement Award there was a whole lot of swooning going on.

Dean, the President of From the Heart Productions and founder of the Roy W. Dean Film Grant, has helped filmmakers realize their dreams by helping them realize their funding for over 4 decades. In accepting the award at the theater, Dean said, “I am truly blessed, I get to work with donors for the grants, who are heart-felt people in our industry and give to the grants to support emerging and on-going works of heart and passion.”

To date, From the Heart Productions has had 38 grant winners and over $2,000,000 in donations for documentary filmmakers.

“I thank The WIFTS for this tremendous honor that has gone to so many exceptional women”, commented Carole Dean late last month after being chosen for the Lifetime Achievement Award. “My goal has always been to help others stand out and get the awards while I sit back and watch proudly. This is a strange, new, but wonderful experience for me.”

“Mom lives in Spirit and helps filmmakers on a daily basis,” said her daughter Carole Joyce, co-producer of the upcoming feature film Tranzloco (2013) — to be directed by Will De Los Santos — as well an award-winning documentary producer herself.

“I see all that Carole Dean has been doing and has done for the film industry all her life,” Elspeth Tavares, Publisher and Editor-in-chief of The Business of Film which is published 15 times a year on line and administers The WIFTS Awards. “While Carole is a role model for women in film; our award is not really about gender – it’s about unselfish giving to others.”

“From the Heart Productions is really helping to make filmmakers and not films,” Dean told Black Tie Magazine in an interview before the ceremony. And from her experience in the industry, a filmmaker’s faith  in his or her movie is often just as important obtaining funding. Other awards presented today included best screenwriter, best cinematographer, arts advocate and a music award. The red carpet arrivals began at 1 PM with the ceremony starting at 2 PM.

First published in the Film Festival Today on December 31, 2012

WHOMYOUKNOW.COM ON “INSIDE THE PLAZA”

WHOMYOUKNOW.COM ON “INSIDE THE PLAZA”

Published on www.whomyouknow.com It is a place where F. Scott Fitzgerald is forever not growing up, memorably thrashing...
Copyright 2015 Ward Morehouse III
Back to top